Fort Canning Park is one of Singapore's most iconic historic landmarks. Located in the heart of the city, it is a quick getaway and stress-busting remedy to embark in the hill's heritage trail and immerse with the nature. 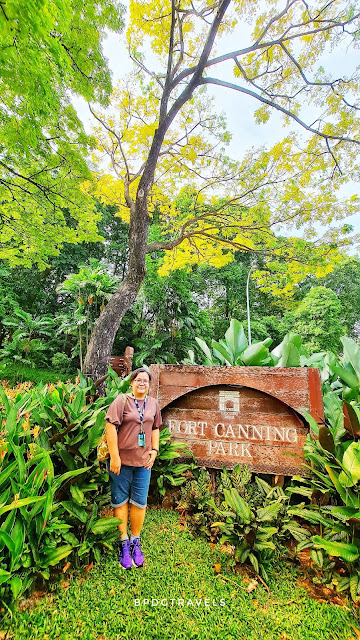 Although the park is about 18 hectares in size, Fort Canning features nine historical gardens! 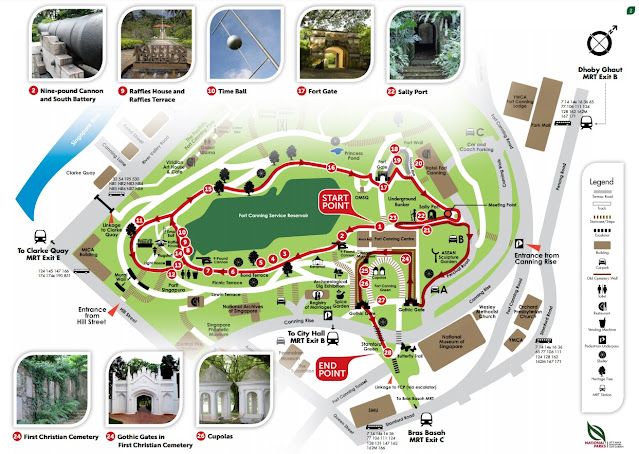 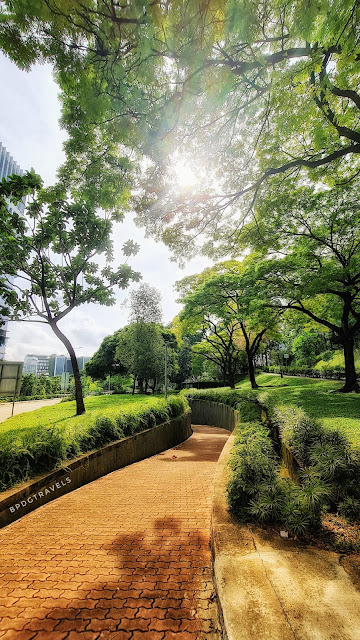 Started our walk at Canning Rise as I wanted to take a peek of the popular instagram hotspot - Giant Tree Perspective from the underground spiral staircase. Looks really cool but be prepared to wait as there are really many who wish to take some pose here even on weekdays off peak hours! Can't imagine how crazy it can be on a weekend. 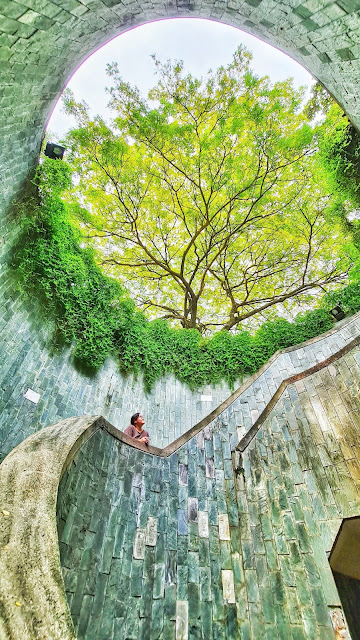 We were lucky - Hubby & I managed to get a quick shot 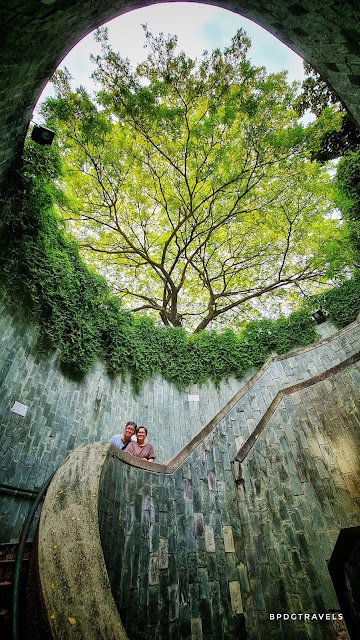 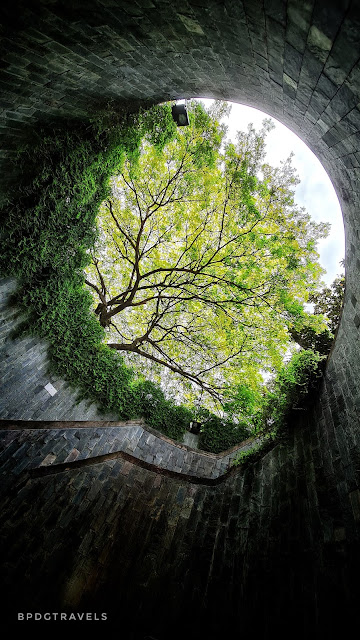 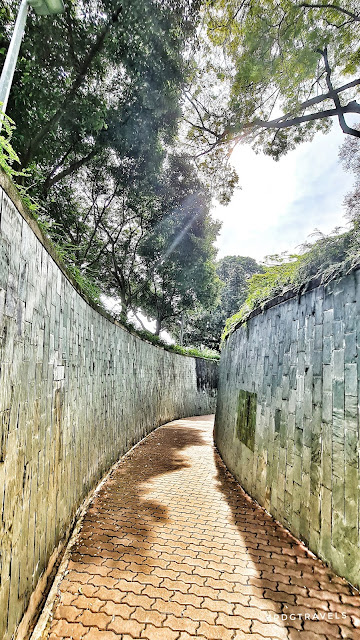 Stairways up to Fort Canning Centre 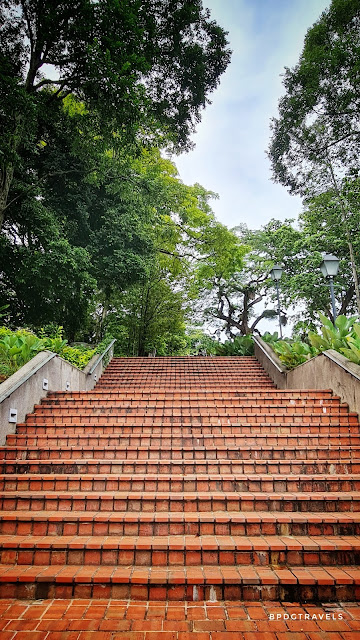 Fort Canning Centre - constructed as a British army barracks back in 1926 and was converted into squash courts and offices in the 1970s. Still having fond memories of The Bicentennial Experience held here before Covid strucked and a little sadden to see how empty and quiet the space has turned now. 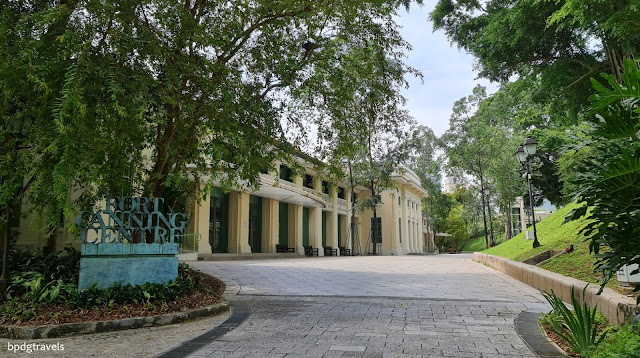 Gothic Gates - The entrances to the cemetery are marked by gateways designed by Captain Charles Edward Faber and they are some of the oldest examples of Gothic Revival style architecture in Singapore. 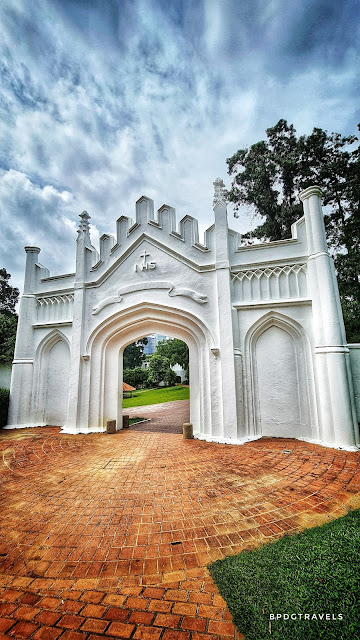 The First Christian Cemetery - The green space is a burial ground from 1822 to 1865. Over 600 were buried here and a third were Chinese Christians. The cemetery filled up and was closed to further burials in 1865. Over time, the gravestones became dilapidated and were removed in the 1970s. Over 200 tombstones were chosen to remain, and these were incorporated into the brick wall bordering the former graveyard. 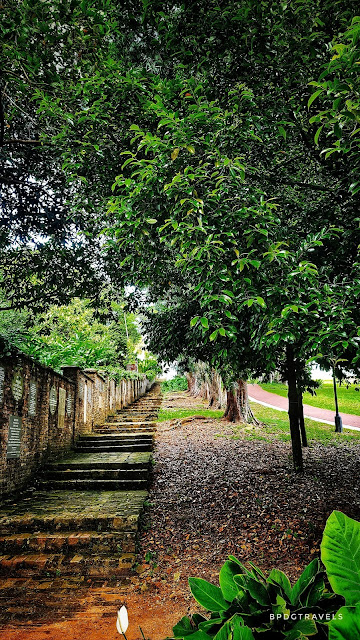 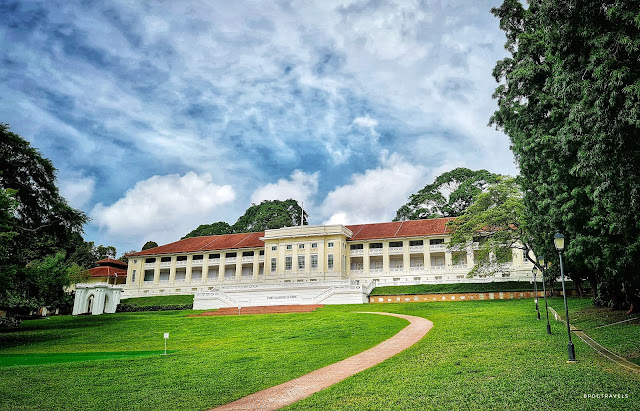 Farquhar Garden - named after Major-General William Farquhar, you can download BALIKSG: Reflections of Singapore Augmented Reality (AR) mobile app to interact and find out more on some of the species through 'living paintings' in giant frames. 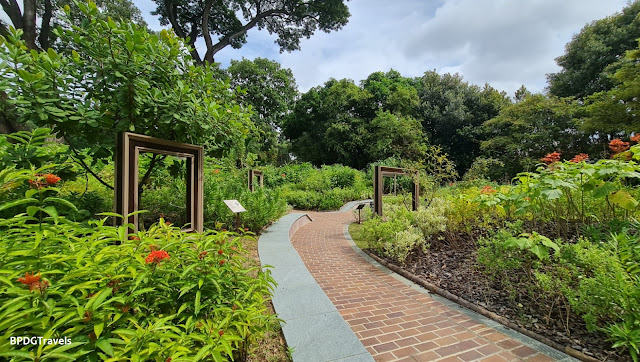 ASEAN Sculpture Garden - There are also many sculptures scattered around Fort Canning and the garden's sculptures are contributed by each member country for the ASEAN. This particular one is executed during The ASEAN Sculpture Symposium in 1981 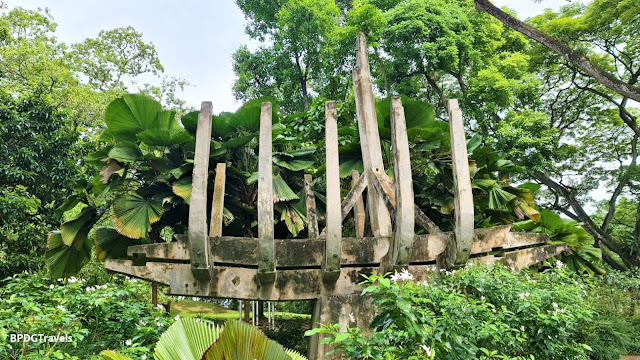 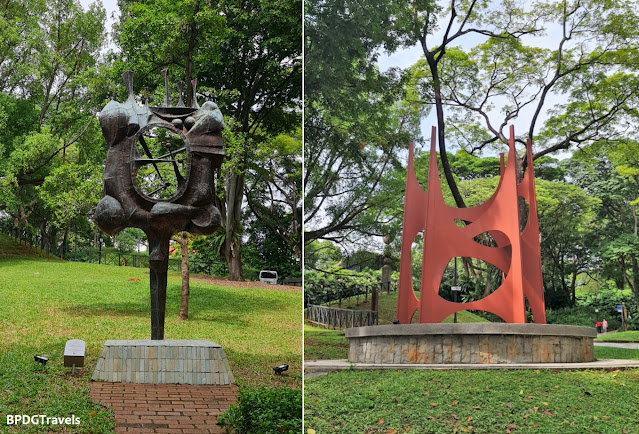 Nine-pound Cannon - This cannon is one of a pair which were used as decorations for the main gate of Fort Canning. They were designed to fire 9-pound cannonballs. Interestingly, these cannons were never used at Fort Canning as they date back to the early 19th century and had become obsolete before Fort Canning was built in 1850s. 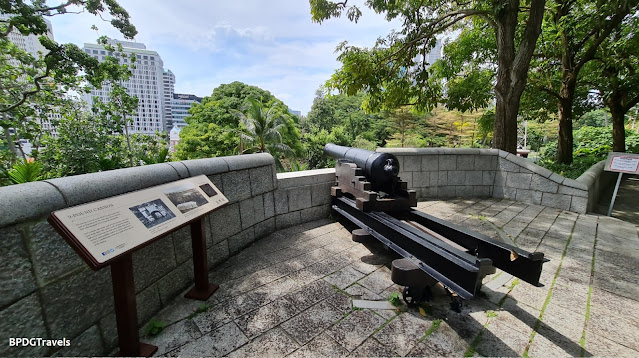 Lush greenery at Fort Canning - a sanctuary away from the bustling city. 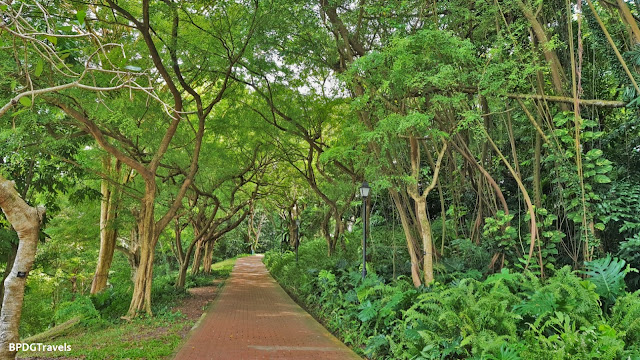 Raffles Garden - Apart from knowing Sir Thomas Stamford Raffles as the founder of modern Singapore, Raffles was also an avid naturalist and took joy and interest in botany. Inspired by his love for plants, the Raffles Garden showcases the diverse plant species that Raffles encountered in Southeast Asia. 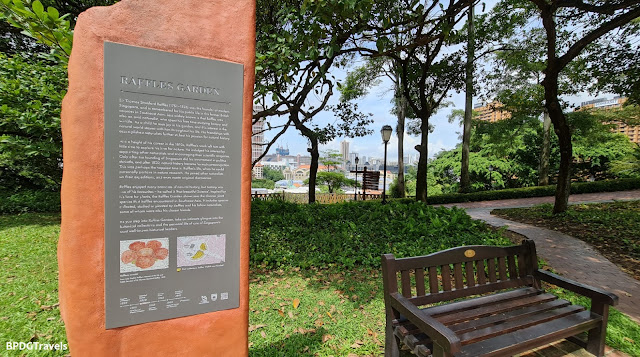 Raffles House - built on top of Fort Canning Hill so that Raffles can admire the beautiful view. This bungalow aslo became the place of residence for the governors after. 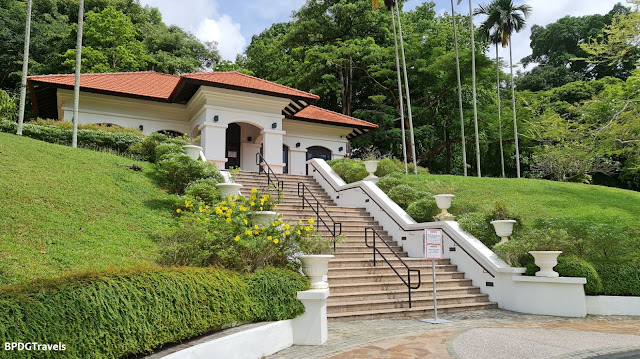 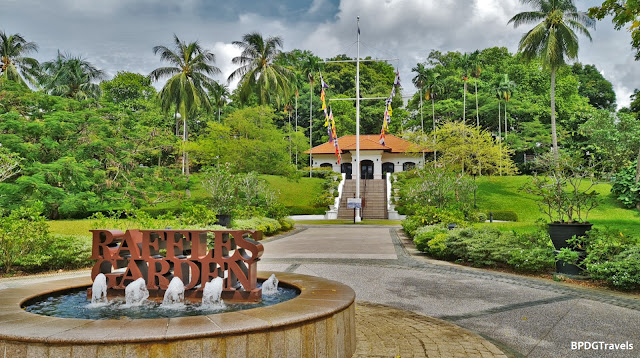 The Fort Canning Flagstaff - The flagstaff serves to provide information on the arrival, identity, location and status of shops entering Singapore's waters, playing a crucial means of communication. This flagstaff is a replica of the original that used to stand before. 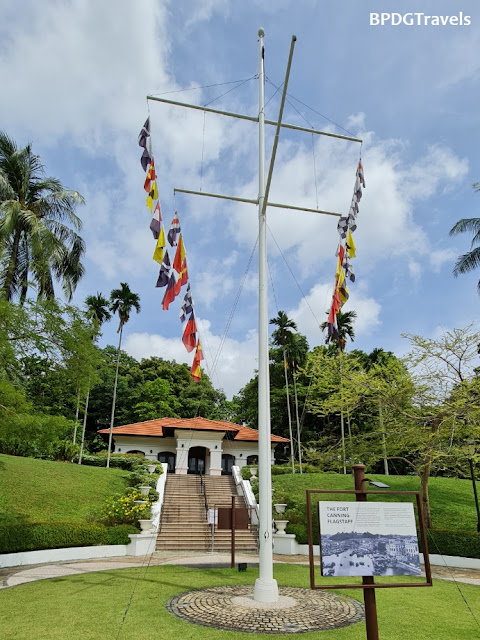 Lighthouse - I never knew there is a lighthouse at Fort Canning. Upon further reading, this is also a small replica of the original that used to stand on Fort Canning Hill - which once was Singapore's most prominent landmarks for ships entering the harbour. With tall high-rise buildings being constructed, the lighthouse was overshadowed and eventually closed. 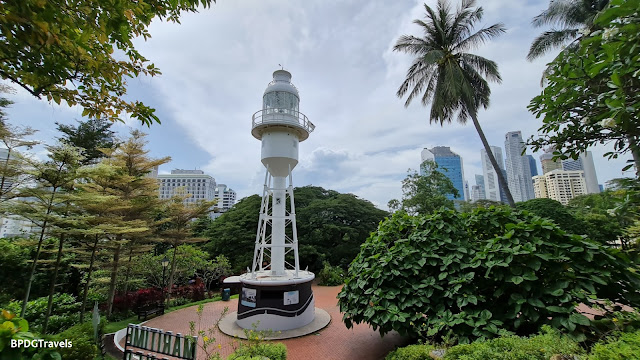 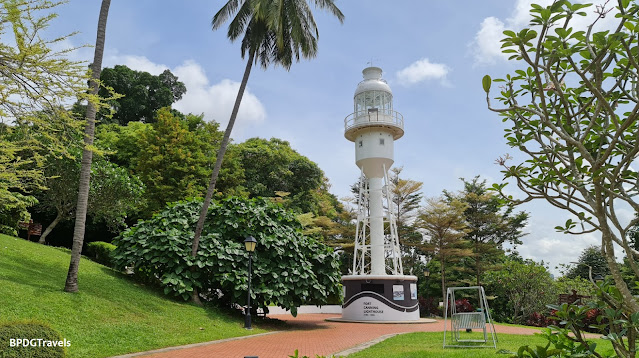 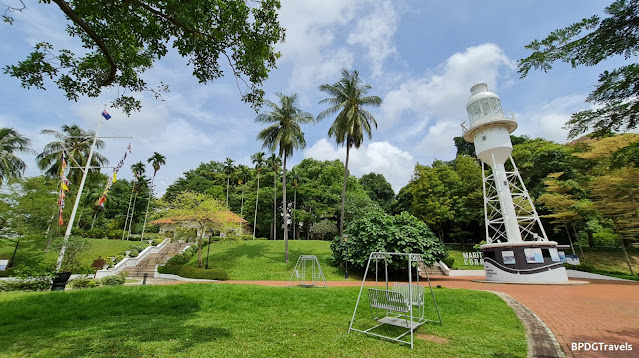 Sang Nila Utama Garden - Named after Singapore's first king : Sang Nila Utama who landed on this island in 1299 and named it Singapura (Lion City). This garden reimagines the ancient royal garden.
The entrance is inspired by the brickwork and architecture from the 14th century Majapahit-era brick  split gate in Trawulan 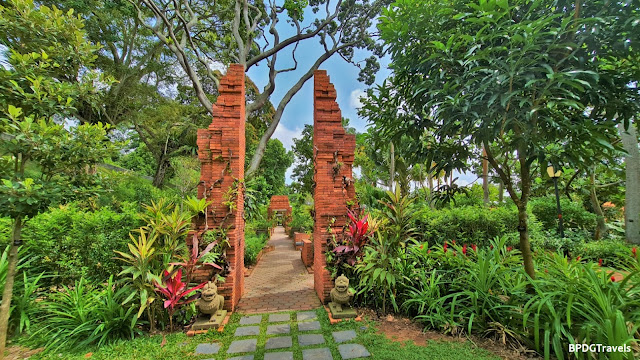 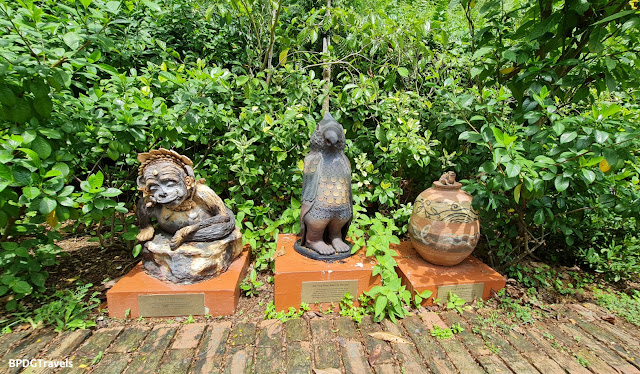 Artisan Garden - former site of the craftsmen's workshop and living quarters in the 14th century. It is also one of the few areas open to non-royals and located here to be accessible to the commoners. Unlike the other areas that has undergone development, the vicinity was left mostly intact. Now, it is one of the last archaeological dig sites in Singapore. 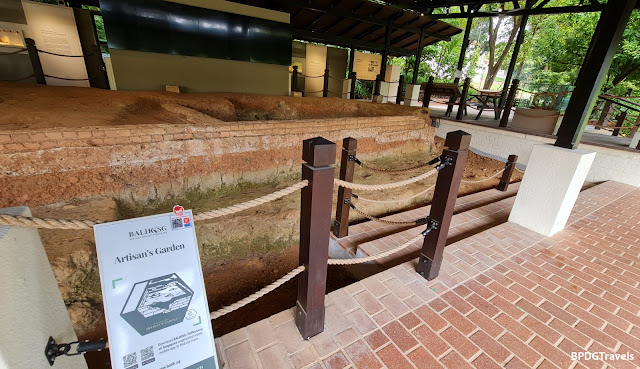 Although Fort Canning may look like a smaller park, there is so much to offer here. For a more information experience, visitors can download the augmented reality app BALIKSG: The Fort Canning Trail which brings you to an interactive journey. Hubby and I did not managed to cover every area but it has been a good walk and learning journey for us.
Fort Canning Park
Nparks Website
How to get there
By Mrt
Nearest MRT Station
- Fort Canning MRT (Exit B)
- Clarke Quay MRT (Exit E)
- Dhoby Ghaut MRT (Exit B)
About 10-15 minutes walk from MRT stations
By Car
Parking available
Phoebe at April 27, 2021
Share